by Rona Birenbaum | Jul 25, 2017 | All About Investing, Cash Flow Concerns, For Business Owners 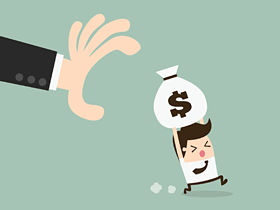 The investigation began in 2014. It concluded, with remarkable speed and efficiency, in 2016.

As a result, major Canadian banks and investment institutions repaid hundreds of millions to customers across the country. Based on years of overcharging.

The OSC (Ontario Securities Commission) has a newish no-contest settlement that allows cases to be settled without an admission of wrongdoing – no surprise that in each case, the institutions “neither admitted nor denied the accuracy of the facts and conclusions” of the OSC staff!

What are our major institutions saying?

What did our major financial institutions call these multi-million-dollar settlements?

Call it whatever you want. If you were one of the thousands of clients who were overcharged (and have been or will be refunded the excess fees), do you think it’s time to reconsider your advisory relationship?

But why penalize the advisor? Isn’t it the fault of the institution?

Because they know they were overcharging you. And if they suggest they were unaware, it’s either an untruth or an admission of ongoing poor service.

The bulk of the overcharging was related to fee-based accounts. These are accounts where the negotiated advisory fee is charged at an account level, rather than at the product level.

Prior to an account becoming “fee-based,” clients would pay by product – through trade commissions when buying stocks and bonds, and through trailer fees embedded in mutual funds. But once an account becomes fee-based, clients pay a fee based on the size and nature of their account.

What happened in most of these cases is that an account holding full-fee mutual funds became a “fee-based” account. At that point, the full-fee mutual fund was not switched into one that excluded trailer fees. That resulted in a layering (or a lathering??) of additional fees. Which means you the investor were paying your original full fee, plus the new fee for being a fee-based account.

Say you’re a member of a fitness club who pays a fee every time you get out on the court. Racquets buff that you are, fired up by Raonic’s rise to fame, you decide one day to become an all-inclusive member.

Now, you’re paying one annual fee that covers as many or as few games as you can manage.

But! Somehow, the fitness club doesn’t notice that you’ve switched payment systems. It continues to charge you for court fees every time you play.

They also, of course, charge you the new all-inclusive fee. For years. Using fee statements that are surprisingly difficult to comprehend.

Not only that, this ongoing ‘problem’ occurs at most major fitness clubs across the country.

To cap it off, the reason you went over to the all-inclusive fee in the first place was at the counsel of your fitness advisor, who gets a percentage of every full-fee, as well as every court fee. Last but not least, you have learned that the management of these ‘fitness clubs’ (you can read my blog on this here) pressure the ‘fitness advisors’ hard to sell as many ‘fitness packages’ as they can, regardless of customer fit (no pun intended ;-).

Was it an accident?

Any advisor that did not understand how they were compensated is a stretch and a half. Here’s a question for you – what do you think would have happened in the reverse situation? If, when an advisor’s client had switched to fee-based, a mistake had occurred such that they received neither trailer nor fees? Would they have noticed then?

At the end of the day, though, I don’t think it matters if you think it was an accident or not.

Any client who was subjected to this double-dipping is the recipient of either dishonesty or appalling sloppiness. Maybe it’s time to look for a more ethical, diligent, trustworthy advisor.